How Much Do Real Estate Agents Make in New York?

Do you make more than agents in New York? Take a look at how much real estate agents make in New York and what factors into the commission.
Learn more about real estate licensing and get exclusive offers

If you’re thinking about going into a career in real estate in New York, your biggest question is probably how much money you’re going to make.

Unlike salary-based jobs, where the pay is fairly standardized and often tied to your seniority, commission-based fields like real estate have large variations in pay between agents. It makes sense if you think about it: the more you sell, the more you make.

Some agents go into real estate for the flexibility and choose to work fewer hours and make less money. Others are grinding all day every day to bring home those fat commission checks.

Whatever your work style and goals, though, it’s important to go into the business with your eyes open. So let’s talk about average agent pay. 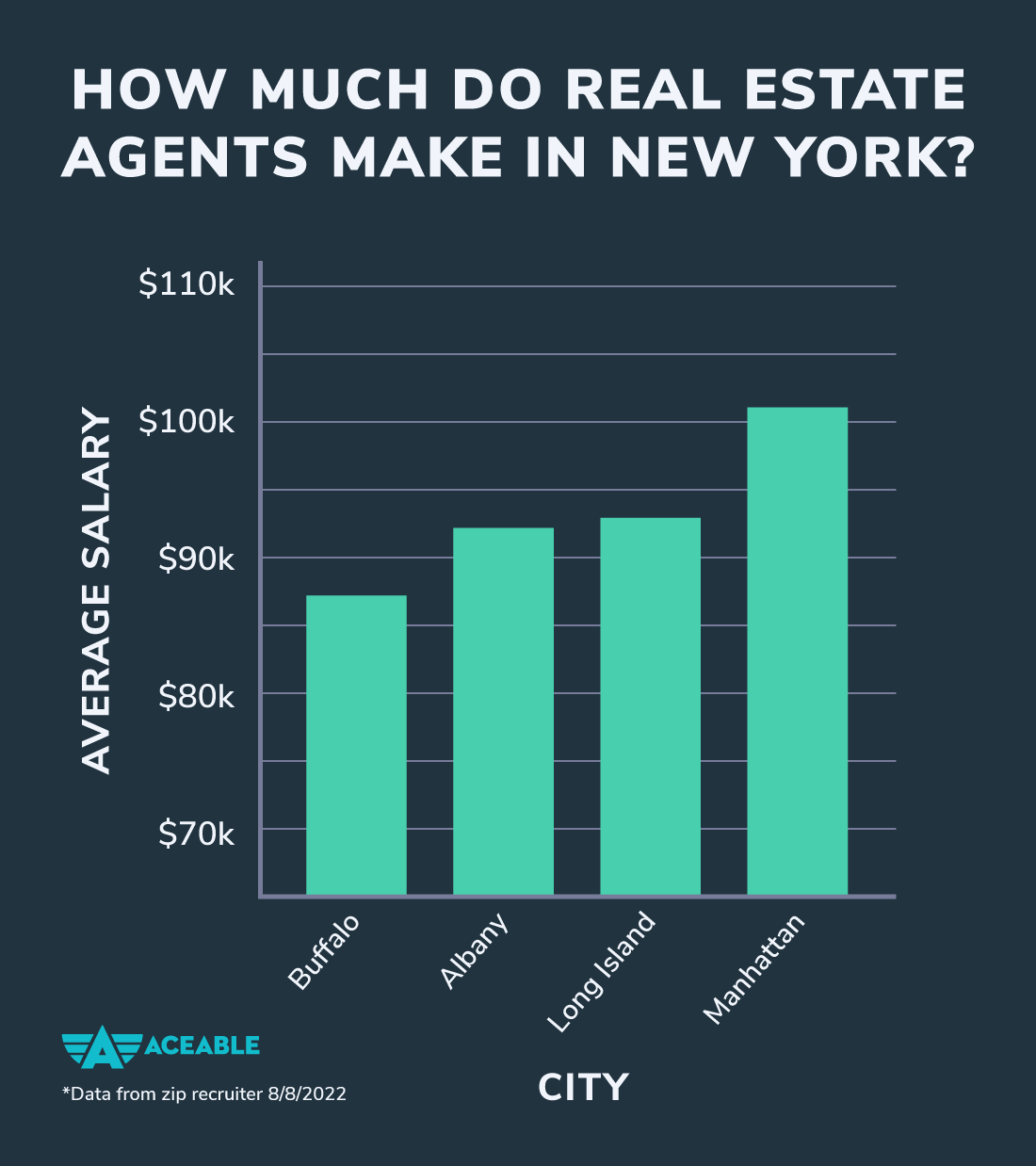 For a luxury real estate agent in the city, Zip Recruiter puts the average annual salary at $125,683.

That’s no small potatoes! But you might be looking around and wondering how every property you see is listed for millions of dollars and agents are taking home low six figures. The answer has to do with commission splits. Let’s get into the details!

In New York, as in much of the country, 6% commission is considered standard, but the commission is always negotiable. In areas where there are a lot of realtors competing for the same business, you might find rates are a bit lower.

A recent poll found that the average commission percentage in New York is 5.75%. With luxury properties (things in the $10 million+ range), that percentage will probably be lower, but the overall commission amount will be higher because the sale price is so high.

In general, in New York, you should expect that the commission will be in the 4%-6% range. But that doesn’t mean that you will take home 6% of the sales price of every deal you do. Why? That commission is split between a bunch of people. Let’s do some math.

There’s no strict rule that determines how much of the commission each agent gets. Usually, the seller’s agent will decide what split they’re offering (and it will be listed in the MLS listing for the property). Sometimes, buyer agents can negotiate a bigger cut than is being offered. Note that it’s not ethical for a buyer agent to refuse to show their client a property just because they don’t like the split.

In this example, let’s say they are splitting the commission evenly: a 50/50 commission split. Each agent gets $30,000 from the sale. But wait! We’re not done splitting yet!

When you first get your New York real estate license, you’ll be licensed as a salesperson. That means that you work under the supervision of a licensed broker. Your broker’s job is to make sure you’re operating legally and ethically as an agent (and if you’re not, they can be held liable for your mistakes).

Brokers don’t supervise agents out of the good of their hearts, however. In the real estate business, salespeople split their commissions with their brokers to pay them for the service of supervising them.

When you’re brand new, it’s typical for your broker to take a pretty big cut. Brokers will often give their salespeople bigger splits the more they sell. This is both an incentive for agents to sell a lot and a reflection of the fact that more experienced agents need less broker supervision.

You then have to pay taxes on that money — remember, most agents are not employees, they’re independent contractors. That means your brokerage won’t take taxes out of your paycheck and it will be up to you to file quarterly estimated taxes.

A good rule of thumb is to save 30% of every check for taxes. In our example, that gives you $9,000 to put into your bank account. So you can see that even though a million-dollar sale sounds like a lot, your cut is much more modest.

Excited to start making those commissions? Learn more about how to get your New York real estate license!

Partner With Us Refer a Friend
©2023 Aceable, Inc. All rights reserved.
We're sorry, Microsoft no longer actively supports your browser. Ready to become a real estate agent? Call our friendly experts with questions: 855-637-1886.