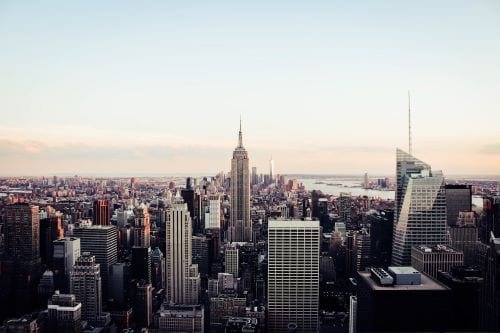 Are you looking to become a real estate agent in New York? Now that we’re well into 2020 and year-end reports are being published, the state of the real estate market in New York this year is taking shape. Will closings increase? Will fears of another recession make buyers think twice? How will inventory levels affect prices?

Let’s take a look at what experts predict will be the biggest New York real estate trends in 2020.

If you look at the stats from the New York State Association of Realtors (NYSAR) for 2018 and 2019 it paints a pretty clear picture. There’s interest in buying, but lack of inventory is holding back sales. It’s a trend that’s seen in a number of large cities across the nation, like Austin and San Diego.

Boosting the number of homes for sale statewide may prove to be a challenge. Population growth is concentrated in a few areas, and many homeowners are choosing to stay where they are and build equity.

Home Prices Will Continue to Climb

Barring an unforeseeable event, chances are good that the median sales price in New York will continue to increase. December 2019 marked the 47th straight month of appreciation. And that’s month-over-month appreciation, not year-over-year.

The two driving factors behind the appreciation are the strong economy and low inventory. Inventory has dropped from 63,576 units in 2016 to 56,215 units in 2019.

For the last few years, developers and city leaders have been lining up the dominos to make the cities just north of New York City much more attractive for urbanites. Yonkers, Mt Vernon and New Rochelle have all been experiencing population growth that can be attributed to a growing selection of affordable housing.

Improving the area just north of New York City is not a new idea. It’s been done in the past, but the grand plans never seemed to pan all the way out. This time around stakeholders are well aware that one or two new apartment complexes aren’t going to cut it. There’s needs to be more of a transformation that goes beyond living quarters. Building in recent years has focused on massive mixed-use complexes that offer housing, retail space and commercial space. It’s a much more holistic approach aimed at giving the entire area a facelift.

Further proof that the area north of NYC will keep growing is the announcement late last year that Lionsgate is building a $100 million studio complex in Yonkers. Projects that bring jobs are exactly what the area needs next to keep revitalizing.

Buyer Concerns Over the Next Recession Will Subside

There was a lot of talk last year about a potential recession hitting the country. Recessions are never a good thing for real estate markets, especially those in New York where the strength of the economy affects buyer behavior.

The latest economic forecasts are predicting that a recession won’t likely happen in 2020 as once expected. Three out of four economists surveyed by the National Association of Business Economics believe the economy will experience a slight recession by the end of 2021. Fortunately, economists don’t believe the housing markets are a key player in a potential downturn. Instead, fiscal policies coming out of Washington, including repercussions of the trade war with China, are what economists believe will cause a slowdown.

While a recession isn’t the best news, the factors behind the possible recession won’t impact New York as much as other states with economies that are heavily dependent on agriculture and manufacturing. Current estimates actually show that the New York State economy will continue growing in 2020, which should give buyers confidence.

Add the AceableAgent blog to your reading list! Keep checking back in regularly to get the latest information on the New York real estate markets and developments that matter most to agents across the state.

Leanna Petronella is a real estate content writer at Aceable. When she isn't creating the pre-licensing education courses for AceableAgent, you can find her educating readers with real estate knowledge in publications. She is an author and former college instructor who has published her creative writing widely.