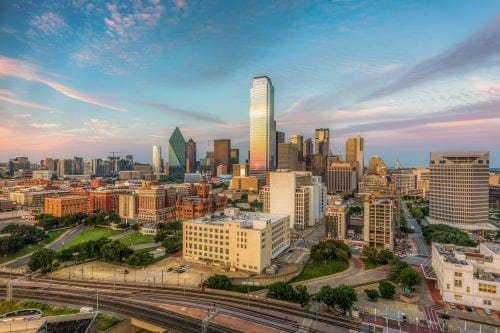 This article has been updated in November 2019 based on new insights from the AceableAgent team.

Texas is the largest of the contiguous states in the U.S. It also comes in as the second most populous, right behind California. This means that Texas real estate agents have a lot to work with, both in terms of:

That’s why knowing the market in Texas is important for licensees. Both brokers and sales agents need to know who is moving where. Market awareness allows licensees to more effectively cater their business practices to current trends, build their client base, and ultimately make more money.

Cities can only grow up and out to a certain extent, and population growth in each city looks different. The cities with the highest growth rates usually grow through urban sprawl, a process in which people rapidly move into the undeveloped, more suburban areas surrounding a city.

This means that when we talk about the fastest growing cities in Texas, the population growth isn’t necessarily happening in the city center. It’s happening in the suburbs and smaller towns surrounding these cities. License holders who know where growth is happening can focus less on the flashy “downtown” areas and focus more on the suburban areas buyers are flocking to.

The population growth in Houston includes a large amount of urban sprawl. Pearland and Conroe are two of the fastest-growing cities around Houston with more suburban and residential options. These areas are often more attractive to families with children.

Austin came in as the #1 Best Place to Live, according to the U.S. News. The good food, high number of tech jobs, and outdoor opportunities are bringing in more residents each day. Because of this, the median home price in Austin is higher than Houston, coming in around $290,000. The median rent rate is also higher, at about $1,200.

Licensees should be aware that urban sprawl is affecting the areas and cities surrounding central Austin more than the city center itself. This includes New Braunfels, Cedar Park, and Georgetown. Brokerages would be wise to cater to their efforts in a certain area. Learn more about popular Austin neighborhoods.

The Dallas-Fort Worth-Arlington area, sometimes called the Metroplex, is the result of several large cities merging into one through urban sprawl. The population includes more than 7 million Texans and the median home price comes in around $240,000, right between Houston and Austin.

Licensees working in the Dallas-Fort Worth-Arlington area have a lot of space and people to work with. Frisco, a surrounding city affected by urban sprawl, has seen the most growth out of all of the other smaller cities surrounding Houston, Austin, or the Metroplex. As such, it’s a real estate hub and a strong seller’s market. McKinney has also seen a large amount of population growth.

San Antonio is a little different from Houston, Austin, and Dallas-Fort Worth. While it is experiencing urban sprawl to some extent, the central areas of San Antonio have seen more growth than its suburbs. San Antonio’s population increased by 24,208 people between 2016 to 2017 and growth has remained steady ever since. Read more about how much realtors in San Antonio typically make.

Should you move to Frisco just because of the high amount of growth in recent years? Not necessarily. But it is good to keep an eye on market trends. This lets you know if your market is ideal for house flipping, a good place to sell tiny houses or ideal for a big-time land developer.