Back in February 2020, Texas seemed to be headed for its sixth straight year of record-busting real estate sales. The biggest problem, according to Cindi Bulla, the chairperson of Texas REALTORS, was that the lengthy sellers' market had pushed prices too high for some people to afford their first home. Existing home sales increased a robust four percent across the state in 2019, and Texas led the nation in new construction starts as well.

Once the COVID-19 pandemic hit, though, things took a sudden detour. Nearly every region of the Lone Star state posted declines in the year-over-year number of sales at the end of Q2. In fact, by the end of June 2020, only three cities were in the black: Abilene was up 3.9 percent, Corpus Cristi rose 4.4 percent, and Texarkana was 5.9 percent ahead of its Q2 2019 figures. The rest of the state posted big declines. Midland and Odessa, hurt by the oil bust, were each down over 30 percent, and most of the major metropolitan areas were down by double digits.

Fortunately, the Texas real estate market is resilient, and its underlying strengths have caused it to recover quickly from the steep declines of Q2. Most analysts are predicting a mild sales price correction in 2021 when more listings are expected to come on the market. That, combined with historically low interest rates, may skew things back toward buyers, at least temporarily.

Personal finance expert and Aceable Analyst Laura Adams encourages potential home buyers to get preapproved for a mortgage before shopping and lock in a low interest rate. Adams says, “Lower monthly payments may allow you to afford a higher-priced home if your finances are in good shape. And in many parts of Texas, outside of major urban areas, the total costs of owning a home are less per month than renting a similar property.”

Adams cautions, “The only downside of buying a home now is that lenders may be overwhelmed by a wave of pandemic-related mortgage defaults, forbearance requests, and refinancing applications. Since getting your mortgage application through the underwriting and approval process may take longer than usual, be sure to factor it into your plans.”

The fastest-growing real estate markets for 2021 are in highly sought-after areas of the state, especially the suburbs of large metro areas. These areas tend to have excellent school districts and offer more bang for the buck. They are perfect for millennials looking for a family home to settle down in. 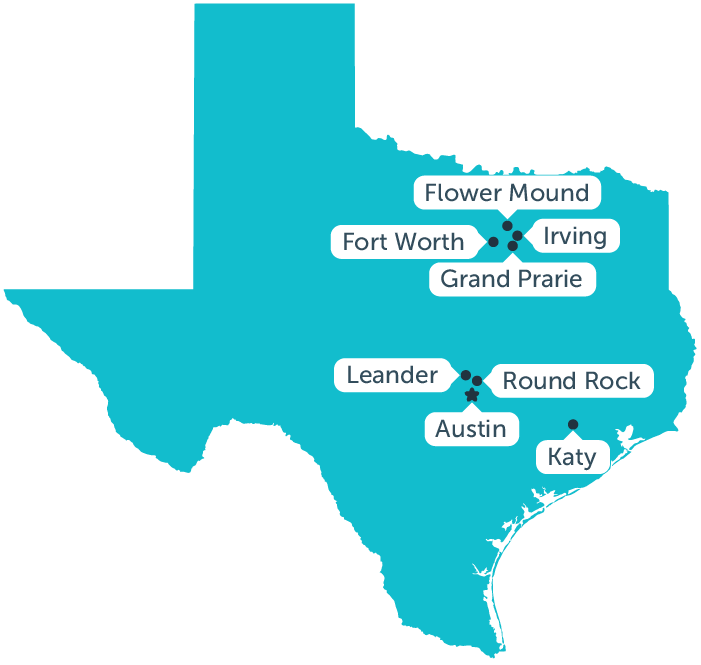 Austin is one of only two Texas cities to make Realtor.com's list of 50 Hottest Zip Codes for 2020. It comes in at number 38. The city is also number two on Buildium's Top 50 Up-and-Coming Real Estate Markets to Watch for 2020. With its thriving music scene and strong job market, Austin attracts aspiring professionals from all over the United States. The greater Austin metro area grew 29.8 percent over the last decade and now tops two million. The average price of a home here is $451,000, up 15.9 percent from the year before. Listings are snatched up after only 10 days on the market, and there are often multiple offers.

This pricey suburb of Dallas-Fort Worth, flanked by recreational lakes, had a population of 79,135 in 2019. It grew 22.4 percent over the last decade. The real estate market here is very competitive, with many homes receiving multiple offers. The average price of real estate in Flower Mound is $428,000, a five percent increase over last year. Homes sell for 0.9 percent less than the asking price on average, and they sit an average of 30 days on the market.

Due to the greater affordability of properties here, the prospects for Fort Worth look better than those for sister city Dallas. It is now the 13th largest city in the United States, with a population of more than 900,000 residents. It has experienced a 22 percent growth rate since 2010. Fort Worth has a "very competitive" Redfin Compete Score of 73. Single-family homes sell for an average of $250,000, a 7.8 percent increase from the same time last year, and they remain on the market an average of 29 days.

Grand Prairie, located right between Dallas and Fort Worth, is a populous suburb with just over 175,000 residents. Realtor.com ranks it 27 on its list of the 50 Hottest Zip Codes for 2020, and its Redfin Complete Score is 84, or very competitive. The average price of a home here is $265,000 — 12.3 percent more than last year — and homes sell for just 0.3 percent less than asking price after being on the market an average of 21 days.

Another suburb of Dallas, Irving had an estimated population of 239,798 and grew 10.9 percent over the last decade. Home to the region's largest office park, it has one of the state's healthiest economies. The average price of a single-family home here is $302,000, an 11.7 percent increase over last year. Houses sit an average of 34 days on the market here.

Austin's suburbs have been growing at a faster pace than the city itself for several years. Growth is particularly strong in Leander, a city 30 miles to the north. In fact, this Williamson County suburb of nearly 70,000 has been named the fastest-growing city in the United States several times in the last decade. Close to the area's recreational lakes, Leander is a family community bristling with new housing developments. The Redfin Compete Score is 76, or very competitive. The average home sale price is $309,000, up 3 percent from last year. Houses stay on the market an average of 20 days and sell for 0.5 percent less than listing price.

Round Rock is more than just another Austin suburb. The home of Dell Computers, it is a thriving city in its own right. Its population has grown a whopping 33.3 percent in the last decade and now stands at 133,372. The Redfin Compete Score for Round Rock is 88, making it a very competitive market. The average sales price of a home here is $310,000, up 3.5 percent from the year before. Houses sell at list price, and they only remain on the market 10 days on average.

Nationwide, inventory declined 32.6 percent in 2020. This trend is evident across much of the Lone Star state, especially in the prime markets around Dallas, Houston, and Austin. The lack of inventory continues to inflate sales prices for now, but many analysts predict that prices may decline when more sellers are forced to list their homes in 2021.

The COVID-19 pandemic has led to an increase in people looking for homes in the suburbs, lake regions, and countryside. According to Reform Austin, the hottest properties are lake homes and ranches. It remains to be seen how long people will continue to leave the cities, but this trend is expected to continue through 2021.

With the average sales price inching higher even as the employment rate increases, more people are buying new and existing properties that list for $300,000 and under. This is by far the most competitive market statewide.

Adams reminds buyers, “Due to the economic crisis, many home lenders have raised their underwriting requirements, such as looking for higher credit ratings or larger down payments. Since that could make it more challenging to qualify, it’s a good idea to review your budget and shop several lenders to get the best mortgage offer possible.”

Total Texas housing sales rebounded 30% in following the sharp downward trend in the spring of 2020. Though fueled by pent-up demand, this recovery suggests that the underlying market is still strong. By far, the hottest places to buy in the state of Texas are the suburbs of Dallas and Austin. Real estate agents also report strong sales of lake homes and ranches as people look for ways to escape the population-dense cities.