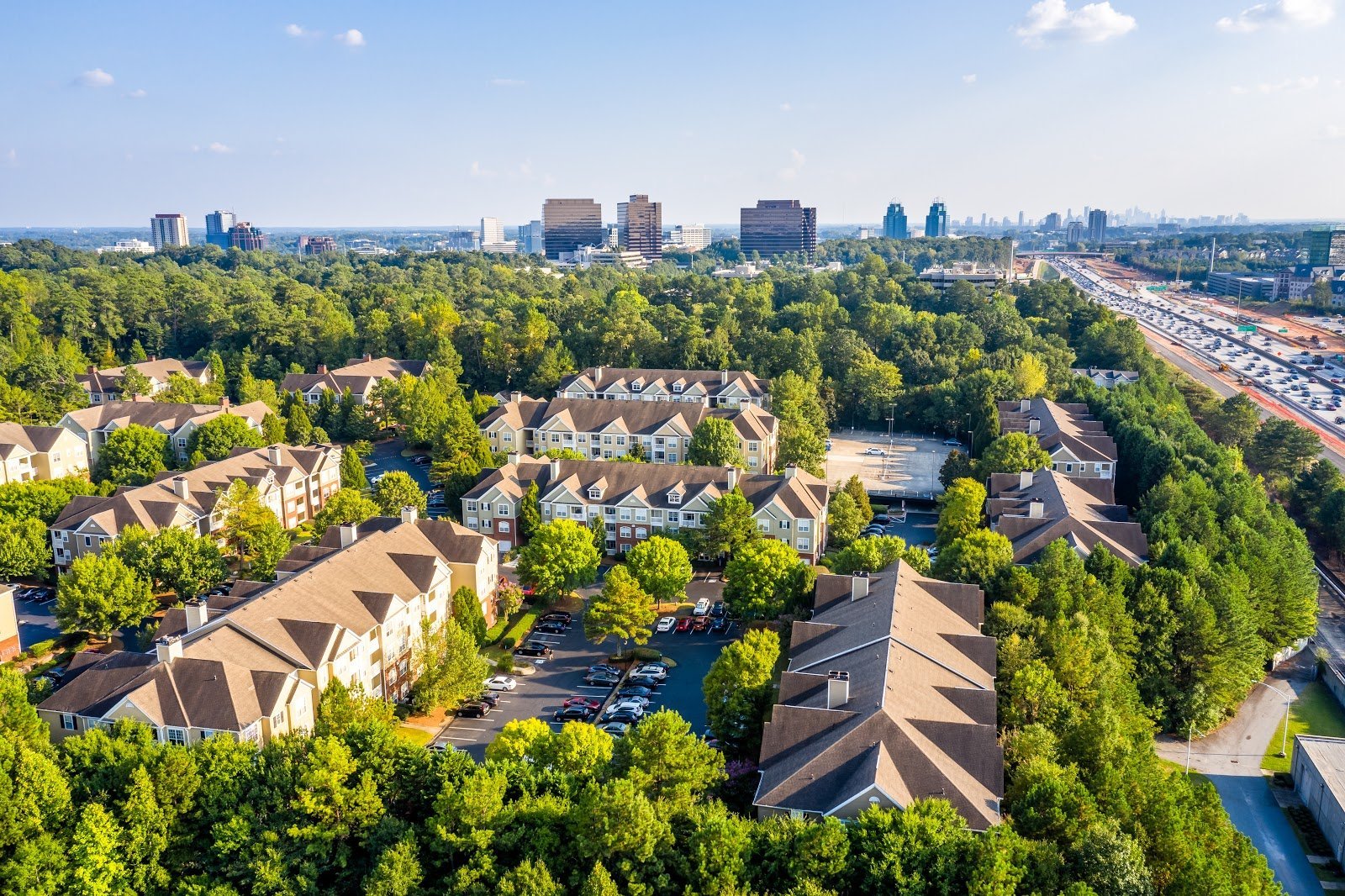 The Atlanta metropolitan statistical area (MSA) is one of the most diverse MSAs in the country. There are 29 counties and over 6 million people that call the Atlanta MSA home. When you talk about Georgia's real estate, Atlanta is going to be at the center of the discussion.

Right now a lot of industry insiders, Georgia real estate agents and analysts are studying the trends and making predictions for 2020. Here are a few trends our team of experts anticipates seeing in the coming year.

Spoiler: Atlanta was #8 on the Urban Land Institute’s list of top U.S. real estate markets for 2020.

If you look at the Georgia MLS’s data on Atlanta residential median price from 2015 through 2019 you’ll see a clear trend - home prices are steadily inching upward. It’s not a dramatic climb, but it’s a very consistent upward trajectory. This is actually a good thing as it helps mitigate affordability issues that are plaguing many other large metros like Austin, TX and San Francisco, CA.

More noteworthy is that in the second half of 2019 median home prices in the Atlanta MSA didn’t drop from their peak in June/July as much as they did in previous years. That suggests median home prices at the beginning of the year will be higher than normal.

Realtor.com forecasts that the Atlanta-Sandy Springs-Roswell market area will appreciate by 4.5% in 2020. That’s less than half of the double-digit appreciation seen in 2018, but it’s significantly higher than the expected overall national home price growth, which is predicted to be just 0.8%.

The Population Will Continue to Grow and Create Inventory Issues

The Atlanta real estate market is far from being balanced despite some accounts that it’s trending toward a buyer’s market. The latest statistics for November 2019 prove that inventory levels haven’t changed much over the last year. With just 2.89 months of residential inventory, buyers are going to continue to compete for well-priced homes, especially those that are priced below $500,000.

One of the top reasons there’s a shortage of homes on the market is the growing population. Currently, Atlanta is the fourth fastest-growing metro in the U.S. Between July 2017 and July 2018 the Atlanta metro population grew by 75,702 people. That’s 207 people a day either moving to Atlanta or being born in Atlanta. One of the most popular areas in Forsyth County. In 2018 it was the ninth fastest-growing county in the country. The county grew by 34.8% putting the population at nearly 237,000.

The Atlanta population isn’t expected to decline any time soon. One projection from the Atlanta Regional Commission is that between now and 2050 the population will swell by another 2.9 million. Two million of those residents are expected to move to the area in the next 10 years.

The last Census in 2010 found that the average household size in Atlanta was 2.3 people. With those numbers in mind, it’s clear Atlanta is going to have healthy housing demand.

The million-dollar question is how well Atlanta is meeting the housing demands of a growing population. So far, it’s been a game of playing catch up. One big reason for the continued home price appreciation is low housing supply across the Atlanta MSA.

The last quarter of 2019 suggests that a lot of home building will happen at the beginning of the new year. Housing starts in November 2019 increased by 13.6% year-over-year, and permits for home building hit a 12.5 year high as builders get ready for 2020. Homebuilders are feeling so good about the coming year their reported confidence level in a December survey for the single-family home building was the highest its been since 1999.

Much of the building activity is happening in the south, which is set to have the highest number of starts in nearly 13 years. What’s even more impressive is the number of multi-family homes under construction across the country. At the end of 2019 it was the highest it’s been since 1974. Those homes will be completed in early 2020 helping to provide relief for buyers that are battling low inventory and affordability.

As long as the Atlanta metro doesn’t have abnormally high rainfall like Q4 2018, there should be a lot of building at the start of the year. The flurry of new development in Atlanta is expected to help correct supply issues, but it isn’t going to boost the monthly residential housing inventory to five or six months (what’s considered a balanced market). This is especially true given Atlanta’s high demand for housing. Instead, new housing will help Atlanta be a more buyer-friendly market in 2020.

The analysts at Metrostudy believe a lot of building activity will happen in Clayton County next year. The county was hard hit by the recession, but it’s rebounded in the last year. Building is also expected to continue at a record pace in south Atlanta as has been the case the last few years. One Metrostudy report found that the majority of the 23,000 lots that were under development in 2017 should be ready for the market in 2020.

Atlanta Will Keep Attracting Investors in 2020

Markets like Atlanta where the economy is steady, the population is growing and there’s decent housing demand tend to attract investors. BiggerPockets.com, among others, named Atlanta one of the top metros for real estate investment in 2020. Why?

While the median sales price of $225,000 to $250,000 may seem high, for a metropolitan area like Atlanta it’s actually fairly good. The Boston metro is smaller than Atlanta yet the median home price in November 2019 was $599,900. In Philadelphia, which is slightly larger than Atlanta, the median list price on RedFin was $245,000 in the slow period of December. Atlanta home prices are comparable to other metros with larger populations, some of which also made the ULI’s list of top real estate markets.

Some Atlanta real estate investors are starting the new decade by diversifying their portfolio with properties that are specifically meant to be AirBnB rentals. Atlanta had approximately 56 million visitors in 2018, many of which used Airbnb for accommodations. Even Haus Gables became an Airbnb in 2019.

There’s nothing in the works that would affect Airbnb’s fully legal status in Atlanta, and investment advisors like Mashvisor predict the cap rate from Airbnb properties will be slightly better than traditional rentals. However, investors do need to get a hotel license and business license to legally operate. You’ll also need to pay the 8% hotel/motel city tax and $5 a night fee to the state of Georgia. Of course, most Airbnb rentals incorporate these costs into the nightly rate.

Where the best investment opportunities are in Atlanta depends on whether it’s a traditional property or an Airbnb. For traditional properties, it’s hard to beat the home prices in Brentwood and Carver Hills, both of which are well below the average median price. The estimated cap rate is also 5.5% or higher in both neighborhoods. For Airbnb rental properties, Princeton Lakes has a good combination of low median home prices, monthly income potential and high occupancy rates.

Appreciation may be increasing the cost of homeownership in Atlanta, but there’s one thing offsetting it - lower mortgage interest rates. The end of 2019 saw a surge in home buying in part because the interest rate dropped to just 3.13% for a 15-year fixed or VA loan and 3.69% for a conventional 30-year fixed loan the first week of November 2019.

Since then the rates have been creeping upward. It’s a trend that will likely continue into 2020 given that the Federal Reserve has suggested another interest rate cut isn’t scheduled for the foreseeable future. The high likelihood of increasing interest rates should motivate people that have been thinking about buying a home to take the next step and start looking. It will help boost activity in Atlanta at the beginning of the year but will be less of a contributing factor if the interest rates get back up to where they were in 2018.

All in all, the Atlanta MSA is on track to be active in 2020 and a little more advantageous for buyers while still being a strong market for sellers. New construction of single-family homes, multi-family homes and condos should help ease low inventory, but it’s still unclear if it will be on par with demand next year.

Audrey Ference is a real estate content writer at Aceable. When she isn't creating the pre-licensing education courses for Aceable Real Estate School, you can find her educating readers with real estate knowledge in publications like realtor.com, homeliteSlate, Salon, Teen Vogue, and many other publications.