Before the pandemic hit, California was one of the hottest real estate markets in the country. Low inventory had created a sustained seller's market with ever-increasing sale prices and steady demand. As with other prime real estate markets across the United States, the main problem was affordability. First-time homebuyers trying to get a foothold in Los Angeles, San Francisco, and Silicon Valley were finding it difficult to purchase anything under $300,000. Compounding the problem for buyers, foreclosure activity hit an all-time low nationwide in February 2020, reducing the number of bargain properties on the market.

The coronavirus caused a temporary disruption to this trend. According to Jordan G. Levine, Deputy Chief Economist for the California Association of REALTORS, new listings declined 43.6 percent in the second quarter. Concern about the economy and fear of exposure to the virus are other factors that depressed home sales in Q2 of 2020.

Right now, California real estate is in a holding pattern. The median sales price statewide is $626,170, up 2.5 percent over Q2, 2019. There is 2.7 months of available inventory, and homes stay on the market just 19 days. It looks like a seller's market, but because the future of the economy remains uncertain, the fundamentals aren't sound. For instance, Levine notes that the Golden State added 500,000 new jobs in June 2020 alone, but at the same time, unemployment in California continues to be higher than the national average. Mortgage interest rates are at all-time historic lows, yet the lack of inventory has led to fewer closings. There is an uneasy stasis driven by people's "wait and see" attitude.

Most analysts are predicting a shift to a buyer's market in 2021, which could eventually help buyers in prime markets like San Francisco and Los Angeles. Much depends on whether there is another large outbreak of the coronavirus and whether new job growth continues, though. The longer potential sellers hold up listings, the longer an uneasy status quo will linger.

Keeping that in mind, the following areas of the state are California's fastest-growing real estate markets for 2021 and what real estate agents should expect. 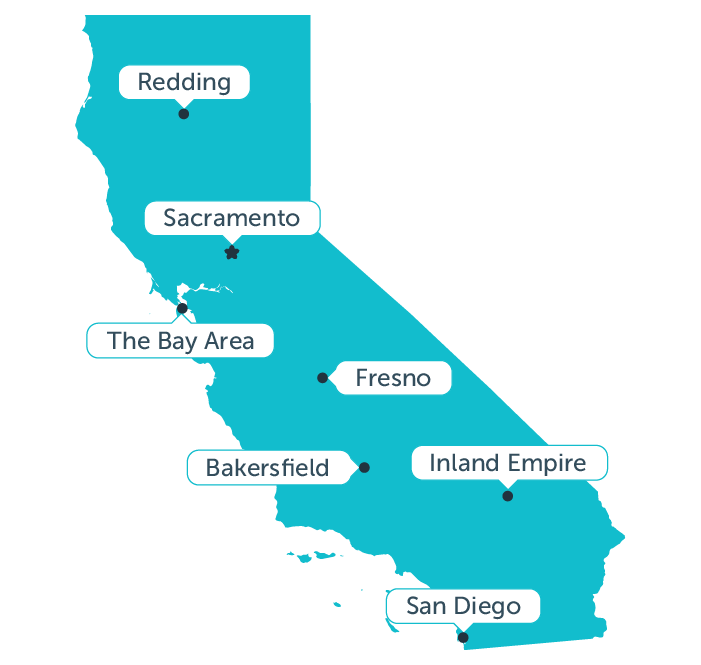 This inland city of nearly 400,000 residents has grown an impressive 10.4 percent over the last decade. The median home sale price for Bakersfield is $280,000, up 12 percent over the same time last year. With a Redfin Compete Score of 79, it is a very competitive market. Properties spend an average of 19 days on the market and sell for right around asking price.

San Francisco is one of the few markets in the Golden State where sales prices dropped 7.8 percent year over year this summer, and the year-over-year gain was only 1.4 percent. Once you move out of the metro area, though, it's a different story. Homes in the Bay Area rose $50,000 from June to July of 2020, and sales are up 14.8 percent over the summer of 2019. Migration outside the expensive Silicon Valley and San Francisco metro area should continue to fuel Bay Area growth through 2021.

The inland city of Fresno has a Redfin Compete Score of 80, or very competitive. The median home sale price here is just around $290,000, an increase of 9.5 percent over last year. Properties have been selling at lightning speed, remaining just 13 days on the market. Fresno's population has grown 6.9 percent over the last decade, creating demand for homes. The market may also heat up as buyers continue to look for homes in less dense urban areas.

Northern California overall saw big sales price increases this summer. The number of pending sales in Redding and Shasta County also increased year over year, up 40 percent from last July 2019. Home prices in Redding have risen 5.2 percent over the last year, and they are predicted to rise another 4.7 percent in 2021. Meanwhile, the median price of current listings is $319,000, well below the median price in California. Due to the area's economic stability and comparatively low prices, it is a good place for investors seeking cash flow.

5. Riverside and the Inland Empire

Some analysts predict a weak real estate market for most of Southern California in 2021, including Riverside and San Bernadino Counties. They argue that, once inventory comes back to normal levels, prices will drop. Others, like Rick Beckwitt, the CEO of homebuilder Lennar, have rosier forecast. He points out that inland sales dropped less than in Orange and Los Angeles Counties, creating a more stable market. With a median price of $380,000 homes are also more affordable here.

In many ways, Sacramento is a microcosm of the California market. The median home value has risen eight percent over last year — it is now $330,000 — and inventory is low. A key difference is shifting demographics. The population of the state capital has increased 9.4 percent in the last decade, much higher than the national average. Sacramento and other small inland California cities could also benefit from buyers' desire to purchase their home in a place with less urban density.

San Diego is predicted to follow the same pattern as other coastal California cities — a slow down in the seller's market. What makes San Diego stand out, though, is the fundamental soundness of the economy. The unemployment rate is 29 percent lower than the California average and 22 percent lower than the national average. With a Redfin Compete Score of 84, it is also one of the most competitive California real estate markets. The median home price is nearly $694,000, up 9.2 percent over last year, and properties remain on the market an average of just 16 days.

A Spike in the Sale of Luxury Vacation Homes

People are buying second homes throughout the United States, leading to a brisk market in luxury properties outside the metropolitan areas. This is particularly true in California. Sales of homes priced $500,000 were up two to three percent over luxury home sales at the same time last year.

A Decline in Pending Sales

Although pending sales were up in June, more recent figures show them stabilizing or even declining. Showing appointments and scheduled closings are also experiencing a slight downtick. This trend may reflect the scarcity of affordable homes in prime markets, but it could also be due to tightening lending standards in the big banks.

Millennials, the single largest group of homebuyers, began to fuel the trend toward suburban living even before the pandemic. Now, buyers are seeking space to spread out and avoid contagion. Movement to the suburbs, rural areas, and less dense cities is a trend that's expected to last at least through 2021.

California real estate has always been a boom or bust proposition, and predicting the cycle accurately can be tough. New challenges, such as the recent wildfires, may dampen the trend of moving to areas bordering wilderness areas. Right now, the fastest-growing real estate markets for 2021 are expected to be smaller inland cities, suburbs, and luxury vacation homes. The big metropolitan areas will come back, but it may take a couple of years. In the shorter term, foreclosures and price cuts could tempt intrepid buyers to invest in high-priced cities like Los Angeles and San Francisco, even as these markets on the whole experience a slump.